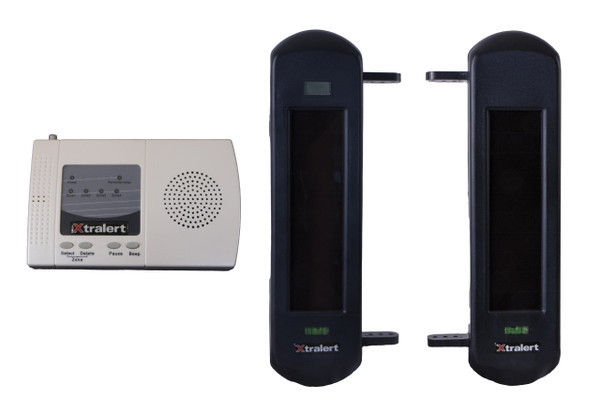 The Xtralert Motion Activated Solar Powered Perimeter System has a wireless range from sensor to receiver of over 1000 feet (ideal conditions), making it one of our longest perimeter detection systems ever.  This system is great for large farms, and remote areas where most perimeter systems wouldn't be able to cover the distance. The beam on the Solar Powered Sensor has a 300 ft range from sensor to sensor, making it perfect for monitoring large areas.  Sensors do need line of sight to each other for proper transmission of signal.  With our three beam technology we have virtually eliminated the opportunities for false triggers.  The beam is very focused and needs a positive break to trigger, so sun, wind, shadows, and small animals triggering your perimeter or driveway alarm are a thing of the past!  Beams must be broken for 1 second to be a true trigger.  Pet immunity sensing allows for your pet to go through the beam without triggering an alarm, no late night critters triggering your Solar Powered Perimeter System!

The Xtralert Motion Activated Solar Powered Perimeter System will never need a battery change.  The solar powered sensors are charged by the sunlight so you never have to worry about dead batteries.

The receiver has 4 relay outputs to trigger accessories such as lights and sirens for a pre-set amount of time.

This system can be used as an entire perimeter detection unit as the receiver is able to accomadate 32 pairs of sensors to each of the 4 zones.

Mounting brackets and screws are included with your order.

The Motion Activated Solar Powered Perimeter System is completly coded and ready for use.  Upon arrival of your system simply lay the sensors in direct sunlight for a day to get a full charge, test inside your home, and then you are ready to mount your sensors.

Listen to all 4 zone chimes below.